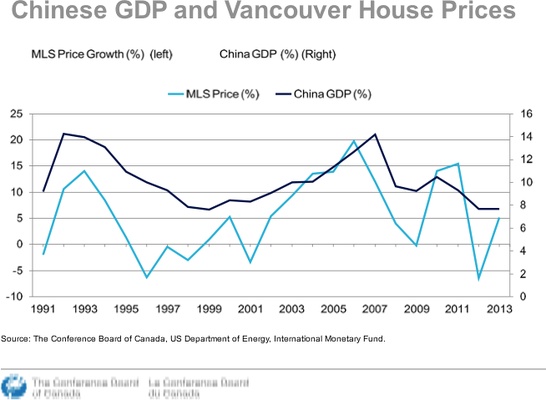 Slowing economic growth in China could put the brakes on Vancouver’s housing market, suggested an economist with the Conference Board of Canada in a November 20 presentation.

Vancouver’s famously unaffordable housing, especially when compared with relatively low incomes compared to other Canadian cities, suggests that a large part of the means to buy a house is coming from wealth rather than earnings, said Robin Wiebe, who specializes in housing markets.

Vancouver’s average home price of $767,000 far outstrips the next most expensive city, Toronto, where the average home sells for $522,000

“Where to look for outflows of wealth? Well, China is the prime suspect,” Wiebe said, noting that real estate investment from Chinese buyers has buoyed the housing markets of several Pacific Rim cities, like Sydney and Los Angeles.

Upticks in local employment growth do not have the same correlation to real estate sales, starts or price growth, Wiebe said. However, a clear connection can be seen between mortgage interest rates and all three of those variables.

China’s rapid economic growth has recently slowed, and given the connection Wiebe has seen between Chinese GDP and Vancouver’s housing market, that slowdown could cool Vancouver real estate.

The upside of that cooling effect could be improved overall affordability.