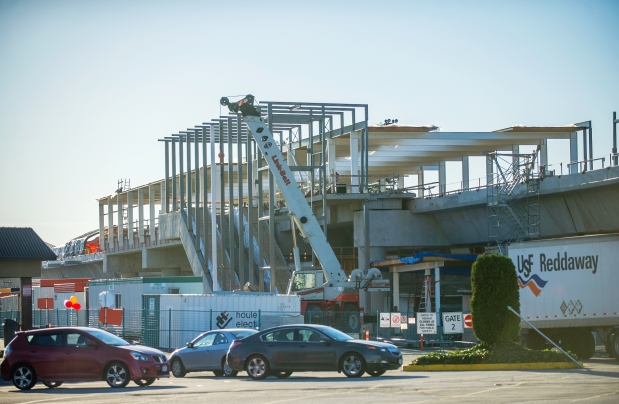 The report noted that from 2012 through 2016, nearly 90 per cent of new office construction outside downtown Vancouver will be within 500 metres of a transit station.

That’s a clear turnaround from 2005 to 2011, when 75 per cent of new suburban office space was built further than 500 metres from a transit station.

The report said the vacancy rate for suburban office space near transit stations rose to 11.2 per cent during the third quarter this year, up from 8.4 per cent a year ago.

It attributed the increase to the recent completion of two speculative transit-oriented developments that are substantially unleased — the Metrotower III tower in Burnaby and the Anvil Centre in New Westminster.

However, the average asking price for office space near transit stations in the region has still increased in the past year, from $22.97 a square foot to $23.53.

“Landlords are obviously not blind to the fact that transit remains top of mind for any suburban requirement,” MacDonald said. “They will hold on to their face rates and maybe increase inducements (to attract new tenants).”

The price for office space more than 500 metres from a transit station also increased slightly in the past year, from $17.62 a square foot to $17.77.

The vacancy rate for transit-friendly office space in Burnaby has nearly doubled in the past year — from 10 per cent to 19 per cent — as the 411,000-square-foot Metrotower III project was completed. About 75 per cent of its space is currently unleased.

The report said nearly 24 per cent of the 1.7 million square feet of Burnaby office space within 500 metres of Metrotown Station remains vacant.

“For the short term, supply has caught up to demand but that space (in Metrotower III) is so new and it’s class-A suburban space,” MacDonald said. “It will get taken up because demand hasn’t gone away.”

The vacancy rate for Surrey office space near transit stations has fallen from 9.5 per cent to 7.9 per cent in the past year, even as the asking price for that space has increased from $23.37 a square foot to $24.35.

The report said completion of the first phase of the King George station development next year and the Gateway Place project in 2016 will increase Surrey’s transit-oriented office supply by nearly 21 per cent.

The vacancy rate for transit-friendly office space in Richmond fell from 5.3 per cent a year ago to 4.6 per cent — about one-sixth the rate for Richmond office buildings located from 500 to 1,000 metres from the nearest transit station.

“Transit will open up more territory for developers and tenants to focus on,” he said. “But the existing nodes are still well-established, so there’s not going to be a new Metrotown popping up somewhere.”